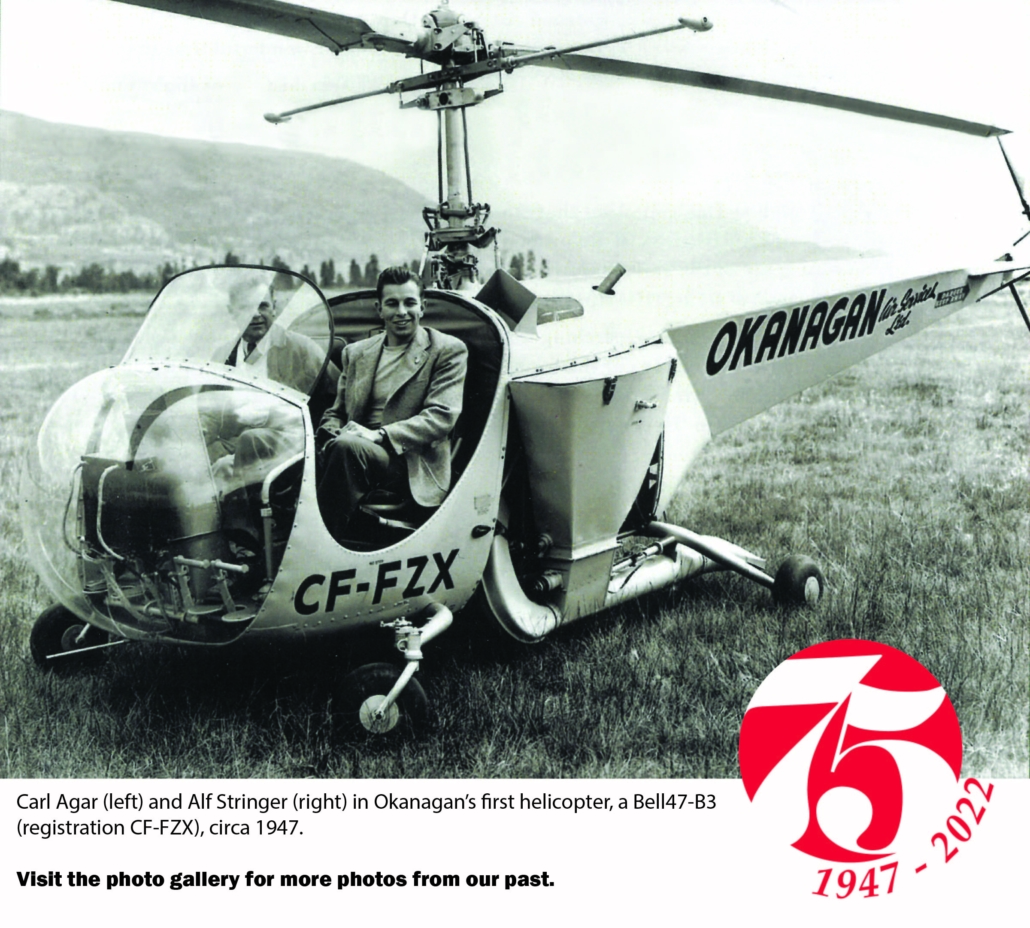 Our story began in 1947 when three Royal Canadian Air Force veterans (Barney Bent, Carl Agar, and Alf Stringer) purchased a Bell 47B3 helicopter, call sign CF-FZX, and founded Okanagan Air Services Ltd. Their vision was to provide orchards and farmland in British Columbia with an innovative form of pest control by way of aerial spraying and dusting.  Little did they know, their modest concept would grow into a remarkable legacy.

From those humble beginnings, the company transformed and grew.   A series of mergers, acquisitions (and at times disposals) involved some notable Canadian and international helicopter companies: Viking, Associated, Sealand, and Helicopters New Zealand, to name a few.  The company also grew to include a maintenance, repair and support business which forms a substantial part of its activities today. Canadian Helicopters developed and mastered safe mountain flying techniques as well as advanced operational and Night Vision Goggle training, now delivered though its sister company, Topflight Elite Training and Charter. Ownership of Canadian Helicopters has changed throughout its history including both public and private ownership.  Canadian Helicopters, in its recent form, has provided services in many parts of the world including Canada, Asia, Asia Pacific, Antarctica and the United States.

Today, Canadian Helicopters is privately owned and employs over 400 employees through its subsidiaries.  The enduring success of the company can largely be attributed to the dedication of those employees, both past and present, and the support of our customers, some of whom have been with us since the very early years. Thank you for your ongoing support through the decades.

Please join me in celebrating a significant year in Canadian Helicopters’ history. 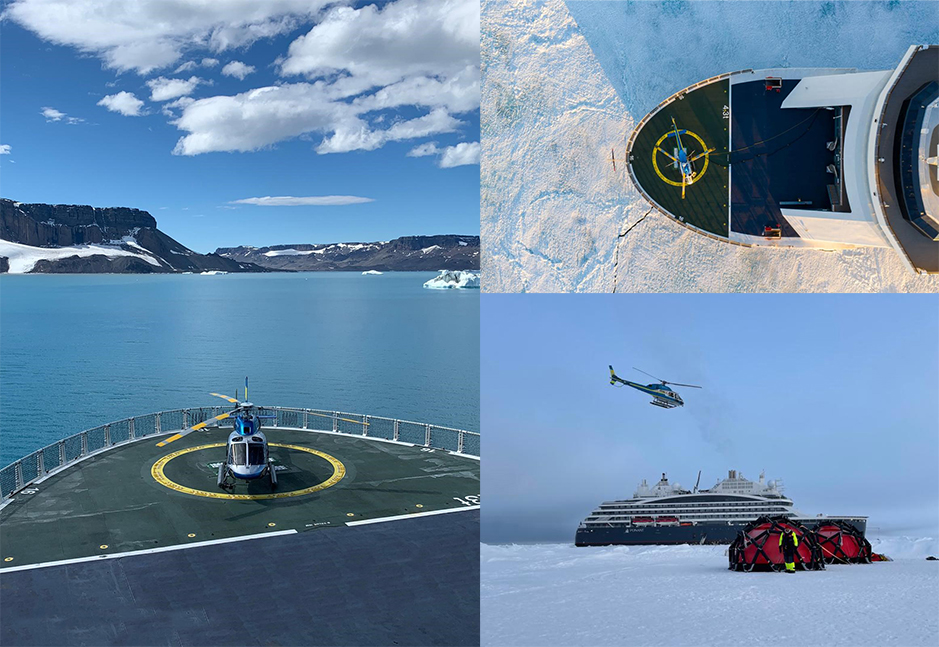 Canadian Helicopters provides helicopter support to Arctic and Antarctic exploration expeditions.   We have been operating in the Arctic since the early 1960s and in Antarctica since 1979.   Pictured above is an AS355N on board an adventure and exploration cruise ship currently operating in Antarctica.  Canadian Helicopters provides all operations and maintenance support including pilots and AMEs.

July 23, 2020 – One of Canadian Helicopters’ Sikorsky S-61N helicopters (C-GJQG) has undergone a significant maintenance project including a major Phase (1 to 7) 10,500 hour inspection, new interior lining installation and application of complete interior and exterior paint. It also went through a major avionics upgrade including the installation of dual State-of-the-art Garmin GTN750 Nav/Comms, dual State-of-the-art Astronautics AFU 4700 Primary Flight Displays, a Garmin GWX75H Weather Radar as well as a Garmin GTX335R ADSB-enabled Transponder. Many thanks to the crew at Heliwelders, Maxcraft Avionics and for the support provided by many Canadian Helicopters employees. Heli-welders employees in foreground.

March 2, 2020 – Canadian Helicopters currently has four helicopters in the Îles de la Madeleine providing transportation for tour groups organized by Hôtels Accents – Château Madelinot. The tours provide the unique opportunity to view Harp Seals on the ice floes around the islands. More information on the tours can be found here.

HNZ Group is pleased to announce it has received a notice of intent to award a contract from the United States Department of Defense in support of the North Warning System (“NWS”). The NWS is an early warning radar system, comprised of 47 radar sites spanning the Canadian Arctic.

HNZ Group, operating under brand Canadian Helicopters, has been selected as the “successful offeror”, subject to customary U.S. government approval of operational funding for each fiscal year and conclusion of definitive contracts. The Department of Defense decision was taken following a competitive bidding process.

A total of nine owned IFR medium and heavy helicopters, including some redeployed fleet from Afghanistan, will be used for the contract. The contract includes a year-round service employing five aircraft on the Operations and Maintenance component, and four aircraft in a seasonal capacity servicing the Bulk Fuel and Supplemental components with various commencement dates. Canadian Helicopters is the current service provider for both the Bulk Fuel transfer and Supplemental components.

The contract is for a six-month base period with four one-year and one six-month extensions, each exercisable at the option of the Department of Defense, for a total of five years with expected aggregate revenues of approximately US$61 million. The prime contractor is the Canadian Commercial Corporation, Canada’s international contracting agency, which focuses on government-to-government contracting and procurement.

“These agreements represent a continuation of our long term relationship with the U.S. military,” said Don Wall, President and CEO of HNZ Group. “We are pleased with the ongoing confidence that the United States Department of Defense has placed in the quality of our services and operations.”

HNZ Group Inc. announced today it has acquired an interest in Norsk Helikopterservice AS (“NHS”), an offshore helicopter provider based in Stavanger, Norway.

As one of the largest offshore helicopter markets in the world, the Norwegian offshore market consists of approximately 60 aircraft operated by four helicopter companies (including NHS), and exclusively employs heavy aircraft due to the distances and environmental conditions involved.

HNZ’s investment in NHS and Norway represents its first in the European market and complements its operations in North America and the Asia-Pacific region.

Ms. Karen Armstrong joined the Canadian Helicopters’ team as ‘Marketing and Community Relations Manager’. Karen has 15 years experience in the aviation industry and has an extensive grasp of the Canadian and South American helicopter market with prior positions which included Safety and Operations, Administration and Sales. Karen’s varied experience will assist us in growing our client base both in Canada and globally.

Karen and Rick will both be based out of the Edmonton office.

HNZ Group has operations in the Philippines, but fortunately no employees were hurt and no aircraft were damaged.

On October 1, Canadian Helicopters and HNZ Group celebrated the Edmonton branch’s relocation from the soon-to-be decommissioned City Centre Airport to the Edmonton International Airport (EIA). An Open House/Ribbon Cutting Ceremony was organized to mark the occasion

The event drew a crowd of over 150 clients, vendors, EIA employees and neighbouring businesses who were treated to tours of the office space, food & drinks, and live entertainment. The event was commemorated by a ribbon cutting ceremony officiated by Don Wall, President & CEO, HNZ Group; Reg Milley, President & CEO, Edmonton Airports; and John Whaley, Mayor of Leduc County. Local TV, newspaper, and radio provided media coverage of the event.

A highlight for many attendees was the unique opportunity to experience an aerial helicopter tour of the airport and surrounding communities. Guests were encouraged to make a donation in support of Youth Empowerment & Support Services (YESS.org), an Edmonton based youth emergency shelter. A total of $1,122 was raised in support of YESS.

HNZ recently embarked on the first flight of a multi-year contract in the Philippines in support of the Malampaya Deep Water Gas-to-Power Project. The AW139 helicopter is contracted to Shell Global Solutions International B.V. to provide crew change helicopter services from Manila and Puerto Princesa to Shell’s offshore petroleum platform.

The contract, which commenced on September 1, is an exciting venture for HNZ as the company expands its operations in the Asian market.

A second AW139 will soon be deployed, also in support of the Malampaya project.

Canadian Helicopters believes that excellence is the only benchmark that counts – it’s why our people challenge themselves every day to outperform and why you can count on our comprehensive range of services to be industry leading.

Learn more about us